The Average Age of a Successful Startup Founder Is 45

Research: The Average Age of a Successful Startup Founder Is 45 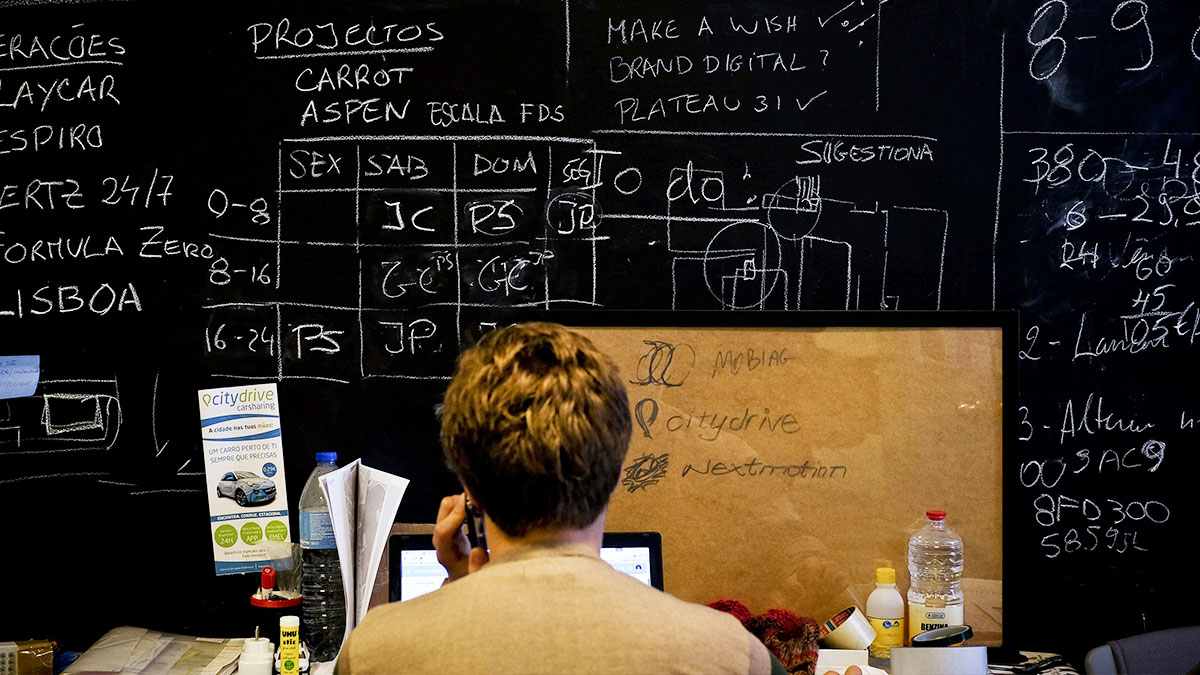 It’s widely believed that the most successful entrepreneurs are young. Bill Gates, Steve Jobs, and Mark Zuckerberg were in their early twenties when they launched what would become world-changing companies. Do these famous cases reflect a generalizable pattern? VC and media accounts seem to suggest so. When we analyzed founders who have won TechCrunch awards over the last decade, the average age at the time of founding was just 31. For the people selected by Inc. magazine as the founders of the fastest-growing startups in 2015, the average age at founding was only 29. Consistent with these findings, Paul Graham, a cofounder of Y Combinator, once quipped that “the cutoff in investors’ heads is 32… After 32, they start to be a little skeptical.” But is this view correct?

Debunking the Myth of the Young Entrepreneur

Our team analyzed the age of all business founders in the U.S. in recent years by leveraging confidential administrative data sets from the U.S. Census Bureau. We found that the average age of entrepreneurs at the time they founded their companies is 42. But the vast majority of these new businesses are likely small businesses with no intentions to grow large (for example, dry cleaners and restaurants). To focus on businesses that are closer in spirit to the prototypical high-tech startup, we used a variety of indicators: whether the firm was granted a patent, received VC investment, or operated in an industry that employs a high fraction of STEM workers. We also focused on the location of the firm, in particular whether it was in an entrepreneurial hub such as Silicon Valley. In general, these finer-grained analyses do not modify the main conclusion: The average age of high-tech founders falls in the early forties.

These averages, however, hide a large amount of variation across industries. In software startups, the average age is 40, and younger founders aren’t uncommon. However, young people are less common in other industries such as oil and gas or biotechnology, where the average age is closer to 47. The preeminent place of young founders in the popular imagination may therefore reflect disproportionate exposure to a handful of consumer-facing IT industries, such as social media, rather than equally consequential pursuits in heavy industry or business-to-business sectors. 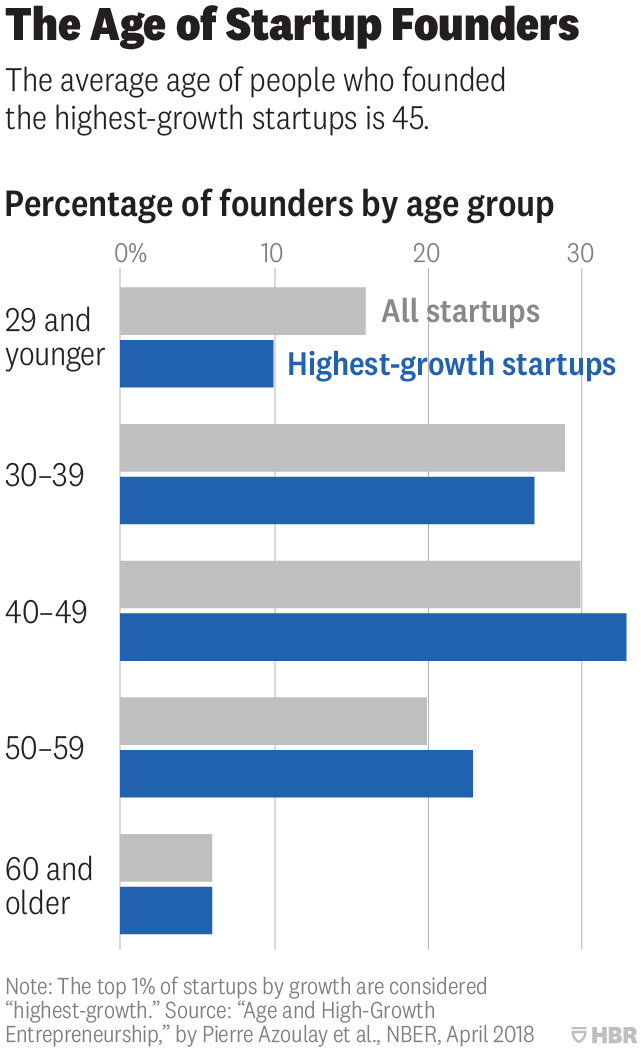 But what about the most successful startups? Is it possible that companies started by younger entrepreneurs are particularly successful? Among the top 0.1% of startups based on growth in their first five years, we find that the founders started their companies, on average, when they were 45 years old. These highest-performing firms were identified based on employment growth. The age finding is similar using firms with the fastest sales growth instead, and founder age is similarly high for those startups that successfully exit through an IPO or acquisition. In other words, when you look at most successful firms, the average founder age goes up, not down. Overall, the empirical evidence shows that successful entrepreneurs tend to be middle-aged, not young.

In part, the dominance of middle-aged founders in starting the highest-growth companies reflects the propensity of middle-aged people to start ventures. Middle-aged people take many more bites at the apple. However, when you look at success rates conditional on actually starting a company, the evidence against youthful entrepreneurial success becomes even sharper. Among those who have started a firm, older entrepreneurs have a substantially higher success rate. Our evidence points to entrepreneurial performance rising sharply with age before cresting in the late fifties. If you were faced with two entrepreneurs and knew nothing about them besides their age, you would do better, on average, betting on the older one. 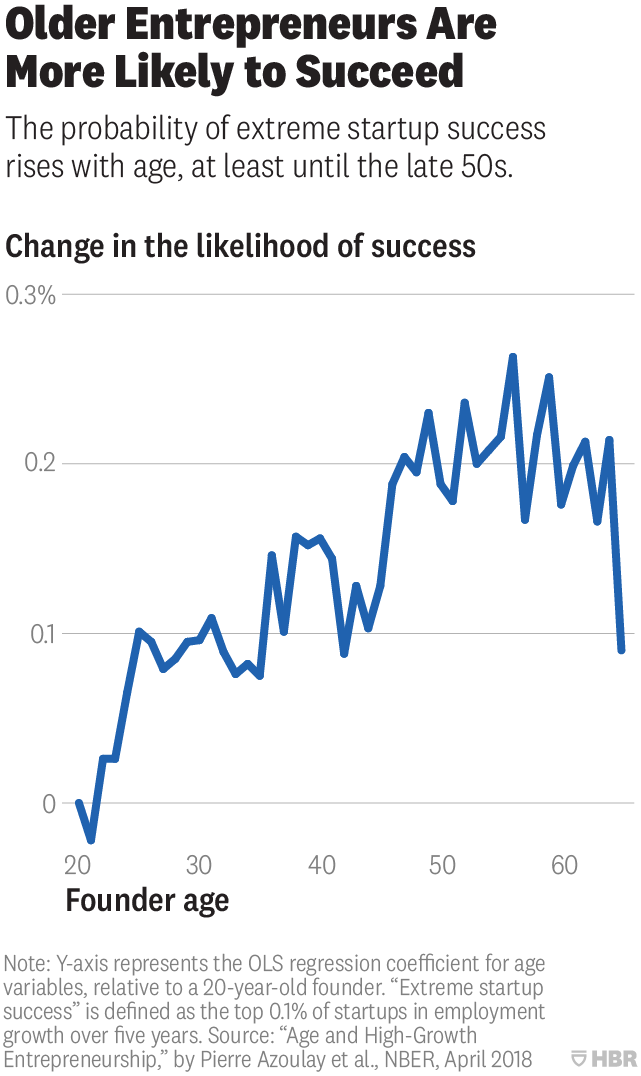 Find this and other HBR graphics in our
Visual Library

Why might this be? Although there are many other factors that may explain the age advantage in entrepreneurship, we found that work experience plays a critical role. Relative to founders with no relevant experience, those with at least three years of prior work experience in the same narrow industry as their startup were 85% more likely to launch a highly successful startup.

But What About Steve Jobs?

Although we have looked at extraordinarily successful firms — the top 0.1% by growth as well as the rare outcome of successful acquisition or IPO — one might still wonder if even more extreme outlier firms are started by the very young. Interestingly, however, when you study notable outliers such as Bill Gates, Steve Jobs, Jeff Bezos, or Sergey Brin and Larry Page, the growth rates of their businesses in terms of market capitalization peaked when these founders were middle-aged. Steve Jobs and Apple introduced the company’s most profitable innovation, the iPhone, when Jobs was 52. Jeff Bezos and Amazon have moved far beyond selling books online, and Amazon’s future market cap growth rate was highest when Bezos was 45. These prominent founders may not have peaked when very young. Extremely talented entrepreneurs may have unusual acumen — allowing them to succeed when they are very young — yet still see greater success as they age. Thus there is no fundamental tension between the existence of great young entrepreneurs and a general tendency for founders to reach their peak entrepreneurial potential later in life.

Why Do VC Investors Tend to Bet on Young Founders?

In light of this evidence, why do some VCs persist in betting on young founders? We cannot definitively answer this question with the data at our disposal, but we believe that two mechanisms could be at play. First, many VCs may operate under a mistaken belief that youth is the elixir of successful entrepreneurship — in other words, VCs are simply wrong. Though it is tempting to see age bias as the leading explanation for the divergence between our findings and investor behavior, there is a more benign possibility: VCs are not simply looking to identify the firms with the highest growth potential. Rather, they may seek investments that will yield the highest returns, and it is possible that young founders are more financially constrained than more experienced ones, leading them to cede upside to investors at a lower price. In other words, younger entrepreneurs may be a better “deal” for investors than more experienced founders.

The next step for researchers is to explore what exactly explains the advantage of middle-aged founders. For example, is it due to greater access to financial resources, deeper social networks, or certain forms of experience? In the meantime, it appears that advancing age is a powerful feature, not a bug, for starting the most successful firms.

Pierre Azoulay is the International Programs Professor of Management at the MIT Sloan School of Management, and a Research Associate at the National Bureau of Economic Research.

Benjamin F. Jones is the Gordon and Llura Gund Family Professor of Entrepreneurship and Professor of Strategy at Kellogg School of Management at Northwestern University. He is Faculty Director of Kellogg Innovation and Entrepreneurship Initiative (KIEI). He is also a Research Associate at the National Bureau of Economic Research.

J. Daniel Kim is a PhD candidate at MIT Sloan School of Management.

Javier Miranda is a principal economist at the U.S. Census Bureau.