We need a Hindu calendar holiday to replace New Years 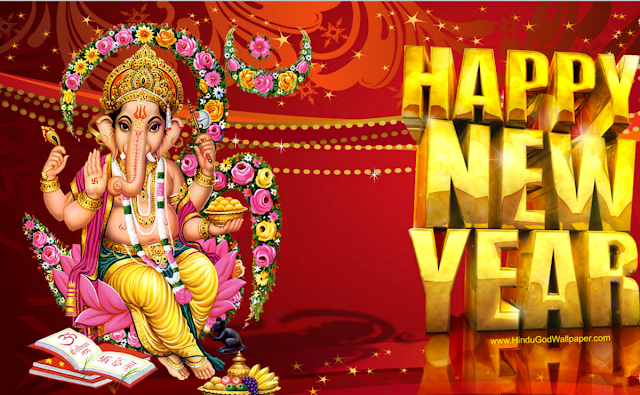 A while ago I posted an article written by my friend on why she had replaced Christmas with the Panchaganapati celebration (here).  Simply stated my friend made it clear that celebrating Christmas could not only be diminishing her own religious culture, but could also be unfair to Christians.  You see, when Hindus celebrate Christmas they usually do so in an extremely secular and religiously detached manner, however the name of the holiday is “Christ’s Mass”, a time when Christians celebrate the birth of their messiah Jesus, and so some Hindus feel it is inappropriate to trivialize the event.

While every Hindu is free to make their own conscious choice about Christmas, my friend's article proposed a viable alternative for Hindus who want to be festive during the Christmas season, yet still maintain Hindu religiosity.  In 1985, the founder of “Hinduism Today” magazine, Sivaya Subramuniyaswami, established a new Holiday called Panchaganapati.  The holiday was created as an alternative to Christmas celebrations for Hindus.  It is a five day festival, marked by the placement of a decorated five-faced Ganesh in the living room, surrounded by gifts and presents.  Each of the five days of the festival asks Hindus to focus on a different social element in their lives: family, distant friends and relatives, business associates, arts and music and finally charity.

While their are obviously other Hindu alternatives to Christian solstice holidays, such as the Hindu holiday of Lohri (Dec 21st) which celebrates the return of the sun god Surya and the gifts of the fire god Agni, the invention of Panachaganapati shows an inventive determination to reorient Hindus back to their religion, even when they are living in nations where they are not the majority.  Ganesh is the lord of beginnings, remover of obstacles and the portent of wisdom, and so perhaps we can call upon this auspicious god to help us with another cultural difficulty, that of New Year’s.

While the complexity of the Christmas celebration is forefront in the collective Hindu consciousness, questions surrounding the attached New Year’s are more remote.  This is likely due to the fact that in Western nations which use the Gregorian calendar the Christian religious significance of this holiday is almost completely unknown.  However the social ramifications of the New Year’s celebration upon non-Christians is no less than 365 times greater than that the one day of Christmas, While Hindus may avoid Christmas celebrations if they choose, it is nearly impossible for them to avoid using Gregorian calendar dates, but what do these calendar dates actually mean?

Few know that another name for New Year’s is the “Feast of the Circumcision of Christ“. During the time of the Christianization of Rome, church officials arbitrarily placed the birth of Jesus on December 25th to coincide with the pagan solstice celebrations of the sun, thus helping induct the European pagans into the new religion.  In Isrealite culture, boys are circumcised 8 days after their birth, and so the church established a new Holiday to commemorate this event, the Feast of the Circumcision, which today falls on January 1st.

Later, when Rome and other European nations were more Christianized, church officials sought to make the Feast of the Circumcision the first day of the year.  However, in order to do this, they would need to uproot the old Roman calendar, with the first day of the year beginning on the Spring Equinox in March. To get the pagans on board, the Church used the name of the Roman god Janus, the lord of beginnings and ends, the two faced god who sees in both directions, to commence their Christian calendar, thus now the first month of the year is “January”. After several years of interplay between Catholic and Orthodox official, the modern Christian Gregorian calendar was formed. 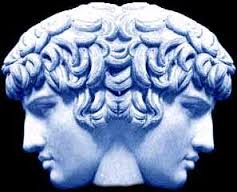 For those Hindus who care to think about these things, we must face a sobering reality.  New Year’s Eve celebrations are fun and exciting and close to absolutely no one is aware of its religious and social significance.  Try persuading your youth to stay home on this evening and you are likely to find yourself engaged in family arguments, standing for principles that your relatives are likely to not even understand.  New Year’s Eve is so taken for granted that principled abstinence would look awkward and irrational to most.

So now we as Hindus are left with the situation of trying to find a way to cope with this situation, looking for a solution which will raise Hinduism to the top in the most efficient and natural manner.  Just as some have looked to Pancha Ganapati (five-faced Ganesh) to solve their Christmas dilemma, perhaps we can look to Dvimukha Ganapati (two-faced Ganesh) to solve the New Year’s question. Why Dvimukha Ganapati?  Why not three or four?  The Christians used Janus, the god of beginnings to start the first month of their new calendar.  Janus is the god with two heads, looking forward and backward, he is also the god invoked at the beginning of all ceremonies and major state actions such as war. Like Janus, Ganesh is the lord of beginnings, he is involved at the beginning of Hindu rituals, he also guards doorways and entrances. Dvimukha Ganapati, like Janus, has two heads, he sees forward and back.  In fact, some believe that this form of Ganesh and Janus are one and the same, cognates of the same conceptual god. 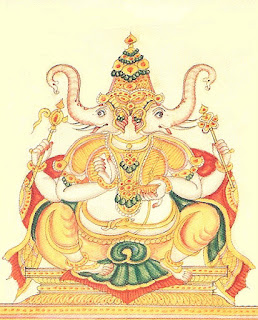 So how do we invoke Dvimukha Ganapati to help us with the New Year’s question?  Let’s not forget that Hindus have our own calendars. Hindu calendars are all interrelated  and run on a luni-solar system, the months are lunar but the years are sidereal. Like the modern Gregorian calendar, which is based on the pagan Roman calendar, our calendar has 12 months: Chaitra, Vaiśākha, Jyeṣṭha, Āṣāḍha, Śrāvaṇa, Bhādrapada, Bhādra or Proṣṭhapada, Ashvin, Kārtika, Agrahāyaṇa, Mārgaśīrṣa, Pauṣa, Māgha and Phālguna.  Like the Romans, the first day of our Hindu new year falls near the spring equinox.  We also have our own days of the week and times of day.

We as Hindus also have the calendar related and exciting world of both astronomy and astrology (known a Jyotish).  Hindu scientists looked to the stars to develop the Hindu calendars and Hindu mystics popularized the science by deifying the planets into gods who can help us unlock the secrets to success in our own personalities.  Hindus are famous for looking to the stars for both scientific and otherworldly advice, why not use this fame to our advantage,

Then there is the interesting and political question of which Hindu calendar to use.  Today there are dozens of closely related Hindu calendars, the divisions usually falling along regional lines.  However the most popular Hindu calendar is that of Vikram Samavant which places us 56.7 years ahead of the Gregorian Christian calendar. However there is discussion about what year of the Vikram Samavant we are in, what event marks the beginning of the calendar and upon which dates certain holidays such as the new year should fall.

So now we have the ingredients for the possible creation of a new holiday of Dvimukhaganapati to compete with New Year’s.  We have an appropriate god, the two-faced Ganesha, the Janus of Hinduism if you will.  We have the interesting topics of learning about our own Hindu calendar months and days, Hindu astronomy, Hindu astrology and the political questions of how to firmly establish our calendar. We also have the challenge of making our new holiday rival New Year’s in the most effective way possible.

It is my hope to stir discussion on this matter, but here is an outline which may help us come to a good collective decision.

1. The celebration shall fall on December 31st – January 1st, to coincide with the Gregorian New Year’s.

2. Festivities should be done in public places such as Temples or meeting halls, this should be an out-of-the-house event.

3. Murtis or images of Dvimukha Ganapati should be present, with an accompanying short ritual and interesting information on the god, his worship and the reason for the creation of the holiday.

4. The atmosphere should not be constrained, no activities should be mandatory, it needs to be relaxing and fun.

5. A main attraction for the event should be free astrology (Jyotish) sessions.  Deeper understanding of the planetary gods should be inculcated through visuals, mantras and written materials. A system for keeping youth engaged  in Jyotish should be derived.

6. The achievements of Hindu astronomers should be presented and an interest in planetary sciences and space exploration cultivated.

7. Booklets or pamphlets should be prepared which explain the Hindu Calendars, the different months  and days, and their correspondence to the Gregorian calendar.

8. Short speeches should be prepared to explain why it is so important for Hindus to maintain their own calendars and also explain the meaning and history of the Gregorian New Year’s.

9. Committees should meet in separate areas to discuss the creation of a synchronized Hindu calendars which brings together the many different dates and starting years of the world’s Hindu calendars, maintaining a loose cohesion over the pluralism.  A strategy should be developed to keep world Hindus engaged in Hindu calendars.

10. The event should conclude with fireworks of crackers (if possible) as a celebration of the maintenance and triumph of Hindu astronomical time keeping.

11.  Later evening events should be planned and may include food and light alcohol. Non-religious entertainment may also be involved. People should feel free to join whatever part of the celebration they choose.

12. Time should be allowed for Hindu youth to leave and join mainstream New Year’s celebrations, if they want.  This will allow them to maintain their important social contacts, they should also not feel constrained or put upon. They should feel free to choose to stay or leave.

So here is the outline for a plan to bring the New Year’s celebration to the aid of Hinduism. Just as some have begun to celebrate Panchaganapati as a replacement to Christmas, perhaps one day in the future the holiday of Dvimukhaganapati can become popular, a method to keep Hindu youth engaged in their religion. Please share this article to perk minds, all material manifestations begin with an idea.  If we do establish Dvimukhaganapati, think of this, there are 32 forms of Ganesh, the lord that help us overcome obstacles… we would now be starting a trend, 30 more problem solving holidays to go!